Morgan Stanley CEO James Gorman told analysts during a January 17 conference call that it was “a great year that finished on a disappointing note” for the wirehouse.

The wirehouse reported earlier Thursday financial results for the fourth quarter of 2018 that included revenue and income declines for its wealth management unit.

In a press release, the wirehouse partly attributed the decreases to “losses related to investments associated with certain employee deferred compensation plans.”

The same release states: “Excluding deferred compensation plans for both periods, revenues were in line with fourth quarter 2017.”

Speaking to stock analysts on the conference call, Gorman expanded on the deferred compensation changes but did not give hard numbers or specific consequences for individual FAs.

The wirehouse’s management made a one-time change to more junior and some non-advisor team members’ compensation plans to reverse “a very aggressive deferral program,” which Morgan Stanley had implemented for “a number of years,” Gorman told the analysts. Morgan Stanley had become “an outlier,” Gorman said, with its aggressive deferred compensation program.

Morgan Stanley made the “adjustments” to its deferred compensation strategy in the fourth quarter to stay competitive when hiring and retaining FAs, Gorman said.

“I went to the board and said: ‘We are pushing way too much compensation into future years,’” he said.

The biggest disparities were between deferred compensation amounts set by Morgan Stanley versus those set by its market rivals for each of their junior FAs, according to Gorman.

“We didn’t actually get the bottom ends of the tables right,” he said.

The changes made to deferred compensation in the fourth quarter represent “good housekeeping” and such adjustments would not take place repeatedly, Gorman said. “This was just cleanup,” he added.

Although costly in 2018, the changes made to deferred compensation will help with attrition in the long run, Gorman said.

Gorman said FA “attrition is extremely low” and “our advisor force, they like working at Morgan Stanley.” But the wirehouse’s FA roster shrank slightly to 15,694 in the fourth quarter of 2018 compared with 15,712 in the same time period for the previous year.

Significantly-sized FA teams exited Morgan Stanley during the past year. In September 2018, a team of six FAs based in Bourbonnais, Ill., southwest of Chicago, which had about $644 million in AUM, bolted for Stifel Nicolaus & Co.

Morgan Stanley’s FA roster shrinkage may have prompted Gorman to highlight his plans to make acquisitions for the wealth management unit. In November 2017, Morgan Stanley dropped out of the Protocol for Broker Recruiting, a 15-year-old agreement governing how FAs of signee firms could leave one brokerage firm for another without getting in legal trouble. 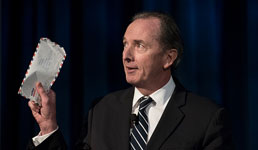 “We are open to acquisitions,” Gorman told the analysts.

For his part, Morgan Stanley's CFO Jonathan Pruzan told analysts that "sharp losses to the investments associated with employee deferred compensation plans had a considerable impact on transaction revenues in wealth management."

The CFO quantified their consequences to the fourth quarter results, stating that the losses had an "outsized impact of over 5% to the revenue line."

Morgan Stanley's management also made "slight modifications to incentive compensation" components that are subject to deferral in order to "bring them more in line with peers," Pruzan said.

Those changes were not related to FA compensation, Pruzan stressed, even though Gorman, during the same call, said that the junior FAs’ deferred compensation had been tweaked.

"Although these factors are not material to the annual results, adjustments can be amplified in any given quarter and impact the segments in slightly different ways," Pruzan said.