Charles Schwab is to buy the investment company assets of USAA, according to news reports.

The $1.8 billion purchase will send the discount brokerage and RIA services provider further into the realm of offering wealth management services directly to investors, the Wall Street Journal reports.

The deal, which also includes USAA’s brokerage and managed-portfolio accounts, will add upwards of a million accounts and around $90 billion in assets, Schwab tells the Journal.

The deal was rumored earlier this month.

Schwab expects the deal to "add modestly" to earnings per share on a cash basis about a year after closing of the deal, the Journal reports, adding that the transaction will be funded with available cash.

Additionally, the head of Charles Schwab’s retail brokerage, Terri Kallsen, is exiting the firm, along with the division’s chief marketing officer Andy Gill, according to news reports.

Craig oversees both Schwab’s retail and retirement plan businesses and was also in charge of both Kallsen and Gill.

Head of Schwab Advisor Services Bernie Clark will no longer solely report to Craig as a result of the shift and will now report to president and CEO Walter Bettinger as well as Craig, the publication reports. 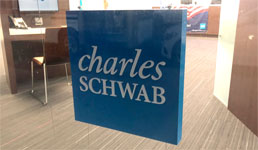 A Schwab spokesperson declined to answer ThinkAdvisor’s questions about the change, saying organizational changes of this nature “happen from time to time.”

Kallsen and Gill were let go amid a restructuring that also includes cutting the firm’s Chairman’s Club program, which provided a trip to Hawaii for the firm’s 200 top performers, according to RIABiz.