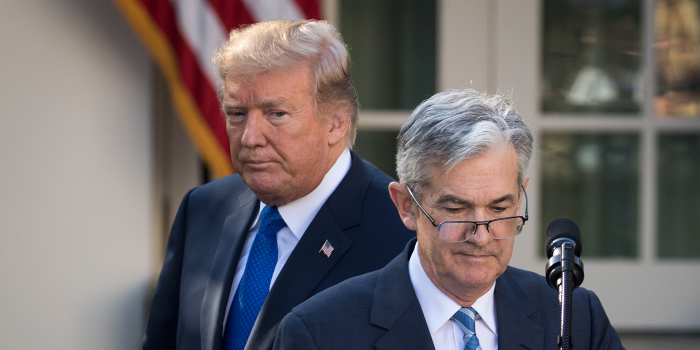 The Federal Reserve’s rate-setting Federal Open Market Committee (FOMC) meets today in a fog of uncertainty about how long the U.S. economy can confound domestic and international downside risks. “This is probably the most opaque investment landscape we’ve seen during the current expansion period,” according to Alex Dryden, global market strategist at JPMorgan Asset Management.

From trade wars to electoral cycles to federal budgets to jobs growth, diverse headwinds have the capacity to cloud the judgement of — and widen divisions between — FOMC members, already laid bare in the minutes of recent meetings.

Regardless of differences between rate-setters, the markets have few doubts about the short-term outlook. Despite GDP growth running at 2% in Q2 2019 and stock indices close to all-time highs, a third successive 25bp cut — lowering the target range to 1.5-1.75% — has been priced into the Fed Fund futures market.

For some investors, three successive rate cuts might suggest significant economic weakness. Further, an inverted yield curve in the U.S. Treasuries markets is seen as a highly-accurate recession indicator. But many argue it is too early for advisors to counsel battening down the hatches.

Nela Richardson, an investment strategist at Edward Jones, says the inverted yield curve is not “infallible,” asserting it could take anywhere between six months and two years for growth to peter out. Nevertheless, she says, investors must expect lower growth, lower returns and higher volatility in due course. Richardson acknowledges the “temptation to go for yield” as returns slow, but also recommends investors retain a balanced approach to their portfolios in accordance with their risk tolerance. As well as buying across the yield curve, this could include holding more cash to help “weather the storm” as turbulence increases next year.

But the Fed is only responding to a slowdown in growth at present, and we should not get ahead of ourselves, claims Scott Brown, chief economist at Raymond James. “We’re a long way from seeing solid indicators of a recession,” he says, but admits he will be listening closely for signals that Powell sees parallels with 2015’s short-lived oil-related slowdown rather than a more serious dip. “Uncertainty bodes well for a diversified portfolio,” says Brown.

Even if a truce becomes a comprehensive bilateral pact, the Trump Administration’s trade focus may simply move elsewhere, specifically Europe.
The Fed may be able to stave off cold economic winds until the new year with just one more cut before year’s end, but Brian Rose, senior economist, Americas, at UBS Global Wealth Management, describes the house view as already underweight equities, anticipating stormier conditions in 2020. “We recommend staying invested, but with some degree of caution,” he says. “Investors should not go out on a limb, but they may want to consider some sort of hedge to mitigate stock losses.”

This means all eyes will be on the official statement released at 2 p.m. Wednesday and all ears on Fed Chairman Jerome Powell’s press conference for clues about what happens next. Will Powell declare he has bought enough “insurance” to ensure the U.S. economy can grow at least until further storms hit in the second half of 2020? Or is visibility so impaired to keep options open for a further cut in December? The answer could decide whether or not advisors recommend immediate retrenchment to more defensive investment strategies.

“The language he uses will be very important,” says UBS’ Rose.

Powell previously pointed to the potential impact of U.S.-China trade tensions as a key source of uncertainty hanging over the U.S. economy, and corporate investment plans in particular. Prospects of resolution are no worse, but no better, than when the FOMC last met, with UBS’ Rose rating the chances of a deal at roughly 50-50. Meanwhile, manufacturing input costs have risen. Even if a truce becomes a comprehensive bilateral pact, the Trump Administration’s trade focus may simply move elsewhere, specifically Europe.

“We’re seeing a broad-based unpicking of the globalisation trend,” says Dryden, suggesting trade disputes could become a permanent feature of the geopolitical landscape.

International risks are compounded by domestic political and economic developments. In the short term, potential curveballs include both impeachment proceedings and the potential of a government shutdown on November 21 if a new government funding resolution can’t be reached. Further ahead, the 2020 election adds to opacity, with experts struggling to interpret the likely candidates’ economic policies. Until recently, strong consumer spending had been a key growth driver, but soft September jobs data raised fears of growing constraints in the labor market. Both the Fed and investors will have half an eye on the GDP, jobs and earnings reports issued later this week.

Will Powell keep his powder dry? According to a tweet sent immediately after his September press conference, President Donald Trump rates the Fed chief a “terrible communicator.” Powell will need all his powers of description if he is to clear the fog sufficiently to help ordinary Americans to make wise investment decisions for this quarter and beyond.

As JPMorgan’s Dryden notes, “This might not be the worst time for bubble-wrapping your portfolio.”