The rich aren’t immune from the spread of the coronavirus, but they do have access to means of avoiding it not generally available to the masses.

The novel coronavirus, first reported in the Chinese city of Wuhan in late 2019, has now killed more than 3,100 people and infected an estimated 93,000 people across 70 countries and territories, according to CNN. Concerns about the effect of the virus on the global economy have rattled markets and led the Federal Reserve to cut rates.

And while the wealthy are like everyone in else in washing their hands to help stop the virus's spread, many are also tapping their resources for more specialized help, Bloomberg writes.

Some are chartering private plane rides, while others are seeking access to “luxurious medical care,” according to the news service.

“Resources like money and transportation and information give people head starts on protective and preventive measures, and can help create more comfortable scenarios for people to cope with disasters,” says Jewel Mullen, associate dean for health equity at the University of Texas at Austin’s Dell Medical School, tells Bloomberg. “That’s where you really get to see disparate needs,” says Mullen, who also served as commissioner of Connecticut's Department of Public Health.

Ken Langone, the co-founder of Home Depot, for example, called the top scientist as well as a top executive at New York University’s Langone Health, which is named after him. He told Bloomberg that he was reassured “by people who are smarter than me in disease” that there’s not much to worry about — and he doesn’t expect any special treatment if he visits the healthcare center.

Tim Kruse, a doctor who makes house calls in Aspen, Colo., says that the rich can’t necessarily obtain things not available to “the common person,” such as a coronavirus vaccine — but it doesn’t stop them from trying. 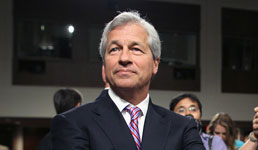 Jamie Dimon (Getty)
“The answer is no,” Kruse tells Bloomberg.

Jamie Dimon, chief of JPMorgan Chase, meanwhile, had a different “vision” of how the coronavirus played out in regards to the world’s wealthiest people.

“I had this nightmare that somehow in Davos [where the World Economic Forum is held], all of us who went there got it," Dimon said, according to Bloomberg. "[T]hen we all left and spread it,” he said during the bank’s annual investor day. “The only good news from that is that it might have just killed the elite.”