As many as 27,722 industry jobs have been spared thanks to loans taken out under the Paycheck Protection Program, new government data shows.

The Small Business Administration on Monday released a list of more than 661,200 companies that had borrowed $150,000 or more under the federal forgivable loan program. Among them were more than 1,400 recipients coded as providers of “investment advice.”

Data reported to the agency by the investment firms shows that, on average, each loan helped protect 21.2 employees. The median number of retained jobs is 14 per company.

Terms of the PPP state that companies can have the debt forgiven if they meet certain criteria, including keeping all staff that benefit from the program. 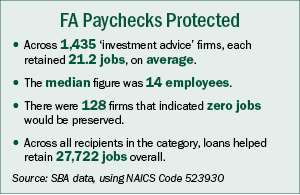 Summit, N.J.-based Simplicity Financial Marketing Holdings topped the list in terms of jobs retailed among financial advice firms. The company, which borrowed between $5 million to $10 million, listed 256 retained jobs, according to SBA data.

One hundred-and-twenty-eight firms said zero jobs were protected, while another 124 left the field blank, the SBA data shows.

Loans issued before June 5 mature after two years; those issued after that date have 5-year terms. On Monday, the program application deadline was extended through August 8.

FA-IQ analyzed data solely for those firms categorized as providing “investment advice” by the SBA, which means estimates of the total number of advisors in the program may vary. Plus, within hours of the data release Monday, some on the list came forward to dispute the reported information.

Geraldine Brimley, for example, appears among the investment advice firms listed, but says she took far less than published. Brimley reportedly told CNBC she applied for $9,300— far from the $5 million to $10 million the SBA’s data purports. “How could they make a mistake like that?” she reportedly said on CNBC.

Still, the 1,435 investment advice providers listed in the SBA database suggest the industry has far more recipients than the dozens believed to have already disclosed loans to the SEC.

Several of the investment advice firms, such as Coldstream Capital Management and RegentAtlantic, were already identified as loan recipients. But potentially hundreds of others emerged since the data was published on Monday. Additionally, names of firms that borrowed less than $150,000 have not been disclosed.

Investment advisors that accepted PPP loans have been scrutinized in recent months by some of their peers. Daniel Wiener, chairman of Brooklyn, N.Y.-based Adviser Investments and editor of the Independent Adviser for Vanguard Investors, told CNBC this week that PPP loans are “for butchers, bakers and candlestick-makers. This is not for RIAs.”

Some, like Cumberland Advisors, have defended their loans to FA-IQ, saying that their board and executive team took the money out of caution. If the $3.5 billion RIA ever found itself in a position where it faced employee layoffs, its leaders would face immediate questions. Employees would ask, “Why the hell didn’t you apply for the loan when you had the chance?” the firm's president and CEO, John Mousseau, told FA-IQ previously. SBA data shows the firm had 46 employees covered.

Several in the industry have returned their loans — some feared the PR headaches; others felt it was the right thing to do.

Jay Healy, president and founder of Memphis, Tenn.-based Century Wealth Management, previously told FA-IQ that he applied for the loan as a prudent measure but returned it days later.

“I had applied when there was a lot of uncertainty, and I didn’t know what was going to happen,” he says.

Although the SBA did not disclose company names for loan recipients of under $150,000, FA-IQ had previously identified at least nine that disclosed having received loans less than that amount in their Form ADVs. CarsonAllaria Wealth Management in Glen Carbon, Ill., as one example, received roughly $91,000, as it disclosed to the SEC. Kane Co. in Johnston, Iowa received a loan of $71,700, according to an SEC filing.