The Breakdown: A Close Look at Advisory Firms That Took Government Money

A total of 5.2 million small businesses tapped the Paycheck Protection Program as of August 8. In all, the federal government’s program provided $525 billion to help employers cover payroll during the Covid-19 pandemic, with the average loan coming in at $100,729.

Around 13% — or 661,218 PPP borrowers — received $150,000 or more, according to data made available by the Small Business Administration. Among them, FA-IQ found at least 1,010 firms that advise individuals on how to manage their finances and invest their money.

It is still unknown exactly how many advisory firms successfully applied for the loans overall, since the SBA published only data for employers that borrowed at least $150,000.

Click here to download an Excel file of the advisory firms disclosed by the SBA and their PPP loan data.

A total of $659 billion was set aside for the loans under the Coronavirus Aid, Relief and Economic Security Act. The loans, which were available to businesses with fewer than 500 employees, are forgivable if 60% of the amount borrowed is used to cover payroll, among other conditions, according to the terms of the program.

The SBA list of the biggest loan recipients includes 1,435 firms classified as investment advice firms under the North American Industry Classification System. However, a review of the data showed that only 687 are actually advisory firms.

There were a few advisory firms included in FA-IQ’s analysis that the SBA placed in other categories, such as securities brokerage, investment banking and securities dealing, and miscellaneous intermediation.

The New York-based hybrid RIA and broker-dealer has $13.1 billion in client assets. A spokesperson for Steward Partners declines to comment on how the loan was used or if it would be repaid.

The three states that have the greatest number of advisory firms that received PPP loans were California (142), New York (107) and Texas (67). 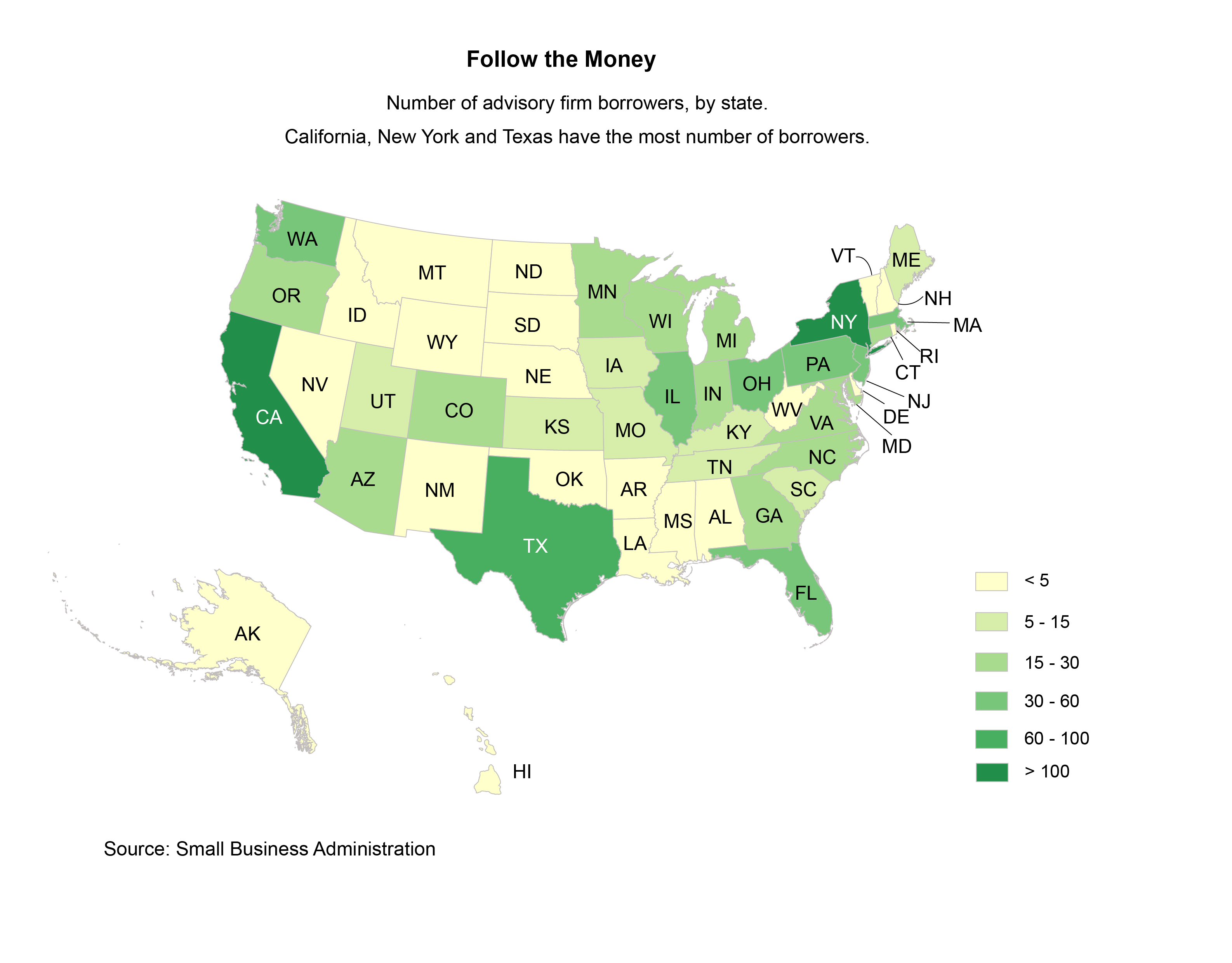 The 1,010 advisory firms in the SBA’s published data told federal authorities that the money they borrowed would protect 18,548 jobs in all. On average, that is 19.2 jobs saved per shop.

The SBA also asked borrowers for information on the race/ethnicity and gender of the owner of borrowing firm.

Very few borrowers disclosed owner gender. Among the firms that replied, 188 are male-owned and 19 are female-owned. 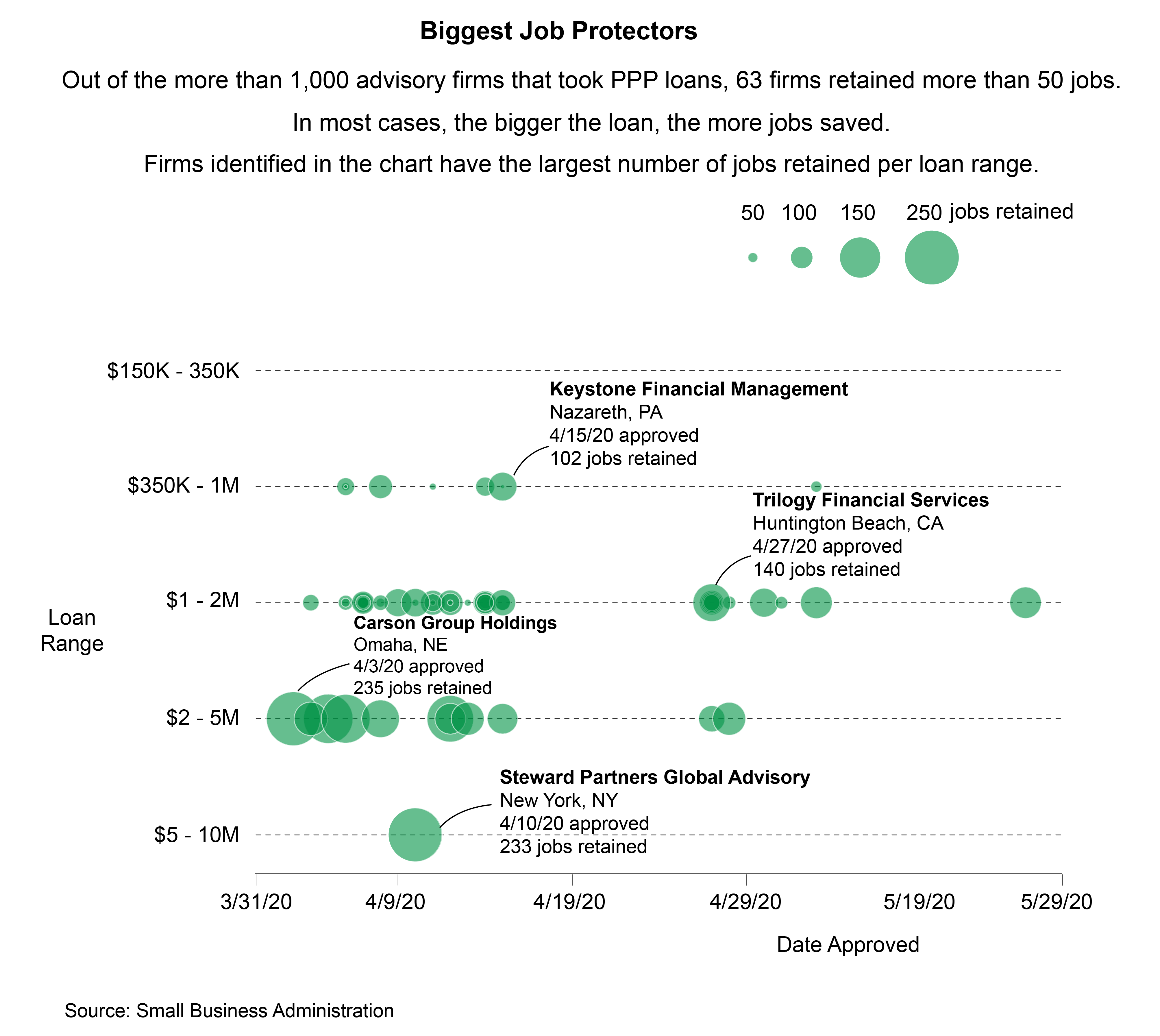 The industry reaction to advisory firms that took out PPP loans has been mixed. Some see the loans as a means to protect employees amid the pandemic. Others contend that loans put advisory firms’ reputations at risk, suggesting they need help to manage their own finances.

RIA networks including Focus Financial Network, Sanctuary Wealth Group and Dynasty Financial Partners took PPP loans. Focus Financial Network and Sanctuary Wealth each describe taking the loan as “prudent,” disclosures show. Sanctuary borrowed between $1 million and $2 million, while Focus borrowed $927,200, regulatory filings show. Dynasty, which borrowed between $1 and $2 million, had not disclosed the loan to the SEC as of this writing and did not reply to a request for comment for this story.

In a May blog post, Joshua Brown, CEO of $1.3 billion RIA Ritholtz Wealth Management, said the need to protect his employees drove him to apply for a PPP loan, which the SBA’s data show was in the $350,000 to $1 million range. 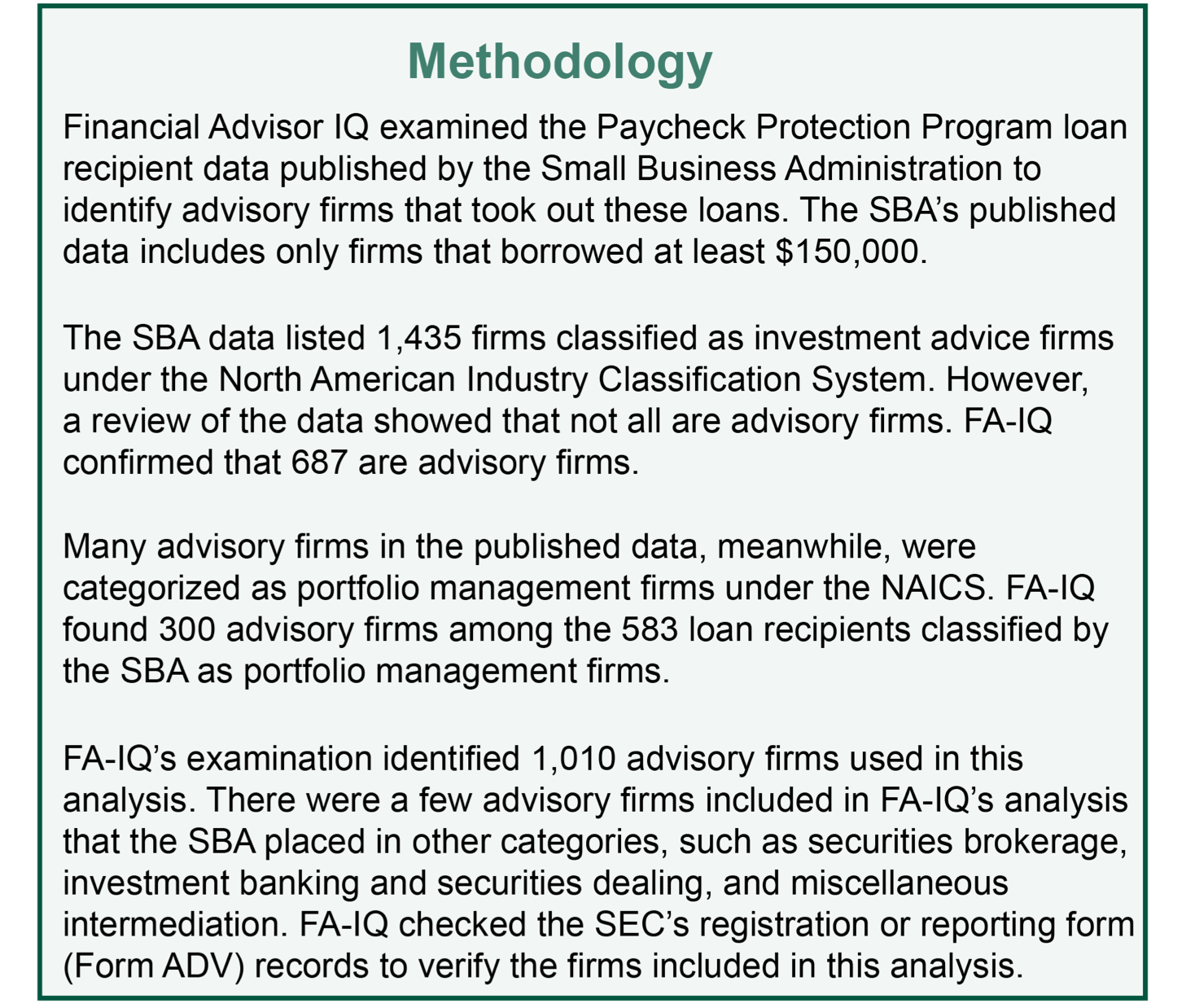 After negative public feedback, Brown told the Wall Street Journal in mid-June: “Give me a time machine after how people have treated me. I’d have remortgaged my house and held more of my money in cash. The lesson learned for me is we need to set up a line of credit in case things like this pop up in the future.”

In late-June, Brown posted in his blog that Ritholtz had paid back the loan plus interest and was replacing it with a traditional line of credit from JPMorgan Chase.

Others similarly said their loans were protective measures.

John Mousseau, president and CEO of $3.5 billion RIA Cumberland Advisors, told FA-IQ in June that his firm applied for its $691,000 PPP loan amid “an explosion of cases” in its hometown of Sarasota, Fla. in order to ensure its 45 employees could keep their jobs.

Nations Financial Group, an RIA with $1.5 billion in client assets, says it needed its $321,200 PPP loan “to support our existing operations without layoffs or reductions of employee compensation.” In June, a Nations Financial spokesperson told FA-IQ the firm had repaid the loan plus interest.

RegentAtlantic, an RIA with $4.9 billion in AUM, disclosed it took a nearly $1.2 million PPP loan “in an abundance of caution and in the absence of clarity on the overall economic impact of the pandemic.”