Fastest-Growing RIAs Based on Asset Growth, Number of Accounts

Integrated Wealth Concepts is the fastest-growing registered investment advisor firm, based on an analysis of client assets and number of accounts over the past three years, according to financial resource company SmartAsset.

The firm’s client assets grew from $550 million to nearly $3.5 billion during that three-year period, while its number of client accounts grew from 3,500 to almost 16,400, SmartAsset says.

In the last year alone, Integrated Wealth’s client assets grew by 158%, while its number of client accounts grew by 87%, SmartAsset adds.

Most of the 10 fastest-growing registered investment advisor firms were established within the past decade, according to SmartAsset.

Integrated Wealth, also known as Integrated Partners, was founded in 2016, making it the youngest RIA in the top 10, according to SmartAsset.

SmartAsset says five other RIAs in the top 10 were established in the past decade. These include AJ Wealth (2012), Financial Dimensions Group (founded in 1995 but registered as an RIA with the SEC in 2012), Mutual Advisors (2013), Integrated Advisors Network (2014), and Visionary Wealth Advisors (2014), according to SmartAsset.

SmartAsset’s analysis identified the 50 fastest-growing RIAs in the U.S. based on Securities and Exchange Commission data. The firm analyzed RIAs with at least $500 million in assets under management as of their December 2017 SEC filings. The firm further trimmed that by removing RIAs that have disclosures on their SEC Form ADV, as well as RIAs that don’t offer financial planning services or don’t serve individual investors. 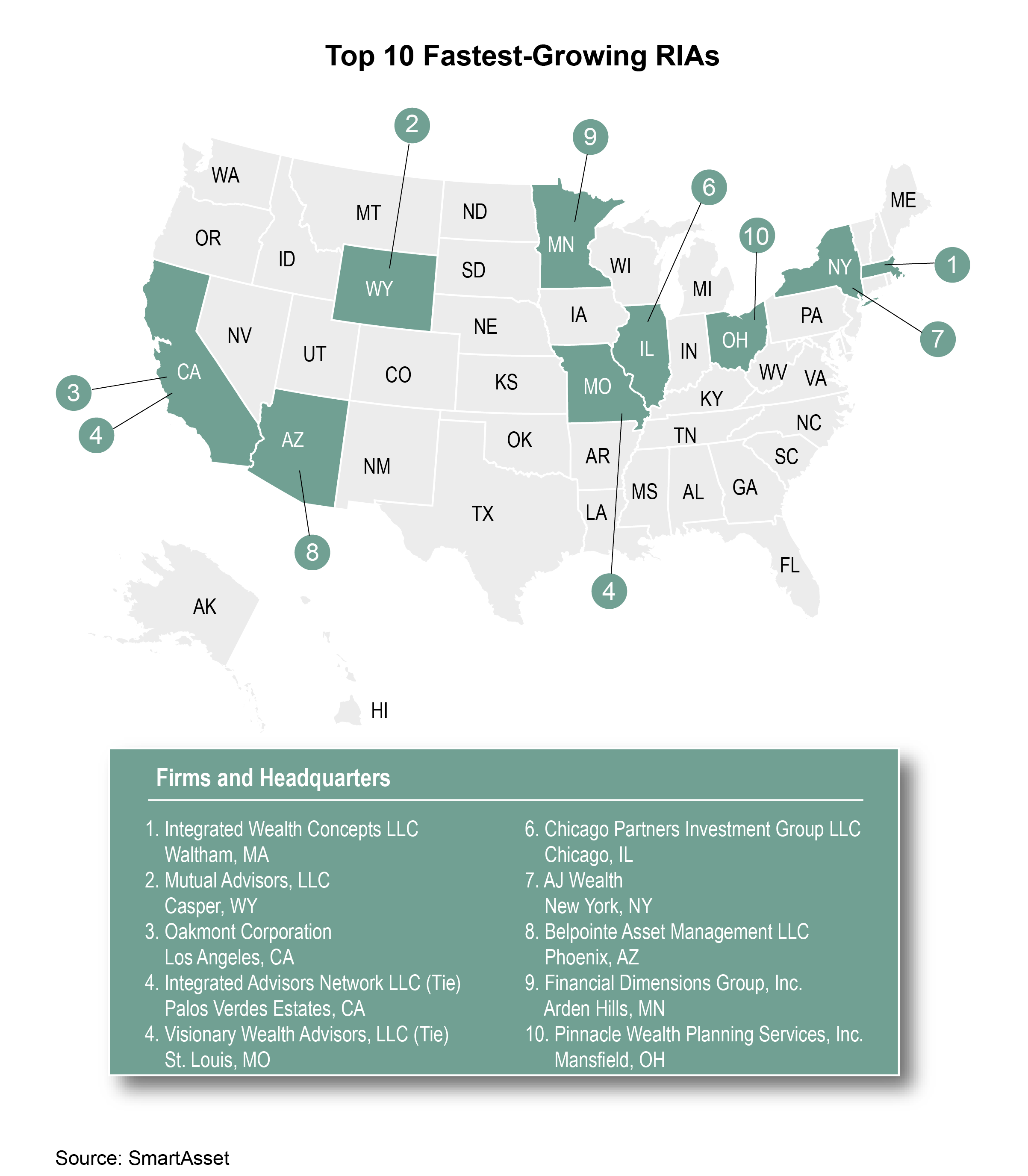 “Though each firm had fewer than 100 client accounts as of its most recent Form ADV filing in December 2020, the total number of accounts at both offices grew by upwards of 80% during the previous three years,” SmartAsset says.

Overall, the number of RIAs in the U.S. is growing, as are the number of clients they serve and assets they manage, the study finds.

SmartAsset’s findings also shows that growth over the past three years has been slower among advisory firms in the South, based on the U.S. Census Bureau’s regional divisions. None of the top 10 fastest-growing RIAs is headquartered in the South, while only four of the top 50 are located there, SmartAsset says.