“I was proud to be a member of Merrill Lynch’s ‘thundering herd’ of entrepreneurial advisors for a decade, today [June 2] I read they are going to recruit all of their new advisors from their bank branch advisor work force?” Jeff Farrar, executive managing director at Procyon Partners, wrote last week in a LinkedIn post celebrating his firm’s four years in business.

“Talk about culture shock — the Merrill advisors I know are entrepreneurs who take pride in building their own practice. And now you are going to replace them with employees? Going to be the Thundering herd of sheep!” he added.

The new program — whose duration was cut from 36 to 18 months, and whose trainees are now banned from cold calling — is aimed at allowing Merrill to develop advisors on a larger scale while leveraging existing talent at BofA, according to Sieg.

Farrar began his financial services industry career with Merrill in 1999, and left the firm in 2009 for UBS, according to BrokerCheck. In June 2017, he was part of a team that left UBS for Procyon, founded earlier that year by Phil Fiore, who had left UBS in 2016. 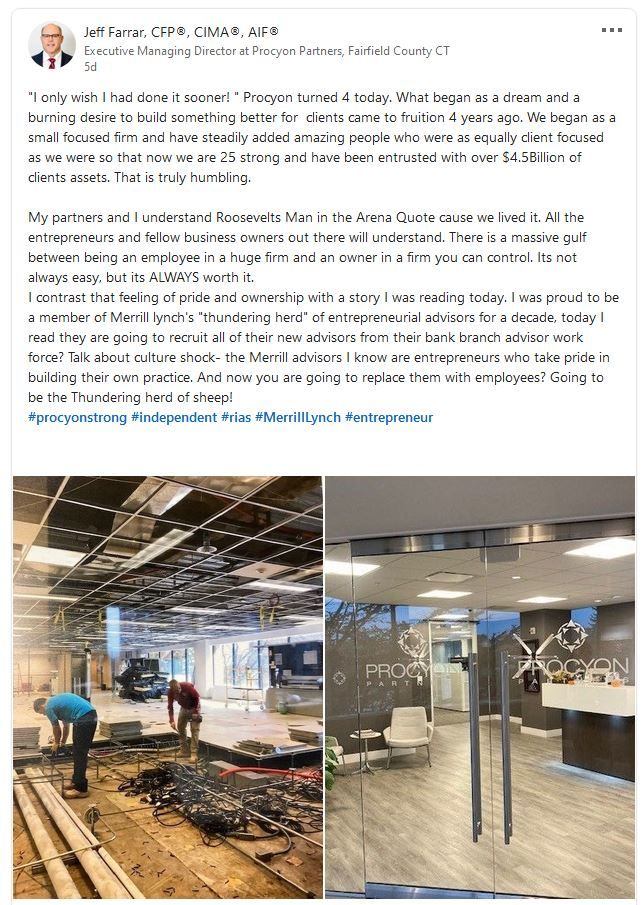 Farrar told FA-IQ in 2018 that the advisors had been disenchanted with the wirehouse model going back to before most of them joined UBS in 2009.

"I only wish I had done it sooner!" Farrar wrote last week on his LinkedIn post. “What began as a dream and a burning desire to build something better for clients came to fruition four years ago. We began as a small focused firm and have steadily added amazing people who were as equally client focused as we were so that now we are 25 strong and have been entrusted with over $4.5 billion of clients assets. That is truly humbling.”

Back in 2018, Farrar told FA-IQ that they first looked at going independent when they were at Merrill, but that was during "the depths of the financial crisis, so we weren’t sure it was the right environment to hang out our shingle."

The “primary driver” for wanting to go independent was to better serve the needs and demands of their clients, Farrar said at the time. He cited as examples being previously only held to suitability instead of fiduciary standards; having only one lending business source for their clients; and not having control over how resources were spent on manpower and technology.

“Our prior firms tend to manage to the least common denominator, and so the large and more sophisticated teams that demand more support just got a lot more frustrated,” Farrar said, noting that the team “outgrew” the wirehouse business model.